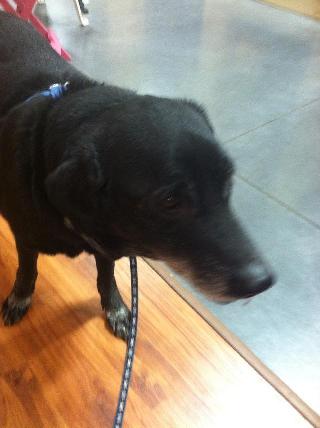 Brace yourselves, folks.  This one's a heartbreaker.  A few months ago, we were notified of a 15 year old (FIFTEEN YEARS OLD!) lab mix, abandoned in a dilapidated barn with no light or heat.  There were several dogs next to him but in a seperate stable that had been taken to a rescue.  When they left, Cyrus did not handle the seperation well.  He cried and cried because he was so lonely. Even though he couldn't see those Adult dogs with 5 puppies, he could hear them and this comforted him.  Without their sounds, he knew he was on his own, and he was terrified. We could NOT stomach the thought of him laying there on a "bed" of hay and horse manure, cold, alone, and in the dark.

We quickly made arrangements to bring him into rescue.  We knew he needed vetting, we knew he was old and not optimal for finding him an adopter. We did NOT know his health, his temperament or his level of  tolerance to other animals.  We did not know who would foster him. It didn't matter.  We also KNEW someone on our team of volunteers would find a way to make it work.  And they did.  As a team effort from Niagara County, to Chatauqua County, to Erie County, and then on to Monroe County, we came together and got him OUT!

Our first stop on the way to his foster home from that falling down horse stable, was Aurora Pet Hospital.  They graciously as always, took us in on a busy day without an appointment.  We feared the worse.  At 15 years old, we could only imagine how his health would be after living in such treachery.  We were beyond relieved to hear that his heart & lungs were strong, and he had no parasites.  No major issues.  He does have an ear infection that we are treating.  He has a bit of age related vision loss, and his eyes are watery, but no cataracts and no infections.  His teeth do have some tartar in the back, and his incisiors are worn down and some are missing from chewing who knows what in the stable. He's a bit arthritic and won't be doing agility or running long distances at a fast pace, but who would at his age? He's got some hair loss due to flea dermatitis, but he's already fluffed up a bit after ONE night of TLC.  He's definitely underweight at only 48 pounds.  He LOVES hard cookie treats, so we are spoiling him with those and some good premium kibble to fatten him up & insulate those old bones a bit.  Cyrus suprised us all today when he showed us he knew how to "Sit" and "Speak" for his cookie.  All in all, YAY CYRUS!

After our vet visit we brought him to one of our foster homes for an overnight stay and a little decompression time.  He had no idea that going through a door and entering a house was even an option for him.  We thought he would be overjoyed with a nice fluffy bed.  He laid on the cold tile floor.  We gave him a few toys, bones, and chewies.  He didn't know what they were. He just wanted to be with someone. Thats all. We wanted so badly to just kiss and hug him as much as we could, but we knew he wasn't ready. Just a pat on the head would have to do for now.

Our second day with Cyrus was nothing short of amazing.  When I picked him up in Chautauqua County the day prior, he barely moved and he was almost silent except for an occasional whine or whimper. His tail just lagged behind him. He hopped in my car with a boost, laid down on the seat and didn't get up until we reached our destination.   The next day, Cyrus greeted me with a few wags of his tail and then he JUMPED in the car and sat straight up the entire 40 minute ride, bright eyed and eager to observe everything that passed us by. Happy Tears!!!

Fast forward a few months, Cyrus has adjusted so well to life in his foster home. His foster Mom loves him to pieces. He is her shadow and follows along with her every day on the farm, helping and overseeing her daily chores. He's a huge fan of treats and will sit and speak on command for his favorite cookies. Foster mom just loves this gentle old man, and so do we. We know not everyone wants a senior dog, and that's ok. But, we here at BPSBR think theres nothing better than the love and companionship of an older dog. We're sure theres someone special out there for our beloved "Cy". We're happy to wait until they come along. Cyrus is too.