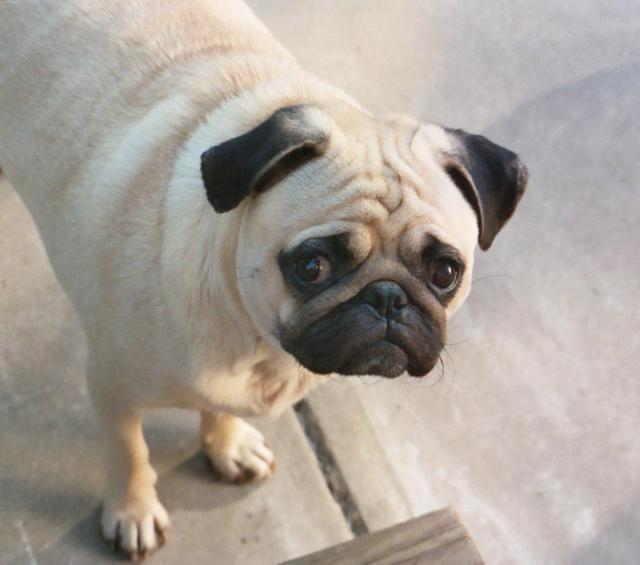 UPDATE: September 11, 2003 Bandit has been adopted!!! He has done wonderfully on his new diet and his skin and coat are in amazing shape already. I'm very pleased with his health, so went ahead and let him go. His new people just love him and are willing to learn about how diet and nutrition will keep him strong and healthy for many years to come. They have also agreed to make sure he gets plenty of exercise to shed some of those excess pounds! I'm thrilled with this placement and will miss my dear, sweet Bandit, but know he will live a wonderful, pampered life as all puggies should. Congratulations Bandit, Tim and Daryl!!

Bandit came to us by "divine intervention" and we are thrilled to have been able to save him from certain death. He had been surrendered by his owner to a rural dog pound with the claim that he had serious medical conditions and he was to be euthanized! A caring soul who just happened to be going through the shelter spotted him, told a friend and she e-mailed our organization hoping that we could intervene. This all transpired on a Sunday evening, with his euthanasia scheduled for first thing Monday a.m.!! One of our officers immediately contacted the dispatcher for the dog warden and pleaded that she be contacted before anything was done with this pug. The dog warden and our officer talked and it was agreed that if the surrendering party agreed to his placement with rescue, he could be turned over to us, but if not, his execution would be mandatory. Thankfully, it all worked out and with the help of several caring folks, Bandit is now being fostered by our Rochester officer, Kat. Whew, that was a close one!!!

About Bandit (by Kat, his foster mom):
Bandit is a typical, adorable pug! His "serious medical conditions" which prompted his surrender appear to be nothing more than a pretty advanced systemic yeast condition, not to mention "shelter stress" from being at the pound for a week or so. He is about 8 pounds overweight as well. I will be treating his condition through agressive diet change and supplementation to build his immune system to fight off the chronic yeast condition. This process should show dramatic results in the next few weeks and I expect him to shed the excess weight in that time period as well.

Bandit has a wonderful temperament even with all the recent disruption in his life. He is completely housebroken and crate trained. He socializes well with the other three pugs and cat in his foster home. He is submissive to the senior (alpha) household pugs and has shown no signs of agression at all. He responds well to basic commands of "sit", "off", "down", "no" and "outside", but in typical puggy fashion, his "come" and "stay" need some work. He loves to play and does a great fetch. He responds well to me and is very free with his love and kisses. His surrendering owner claimed that he likes children, but that has not been tested by me. I have also not tested him with men yet, but he seemed fine with the men that lived with the rescue woman who held him for me the day that he was released from the shelter. These situations will all be tested prior to him being made available for adoption.